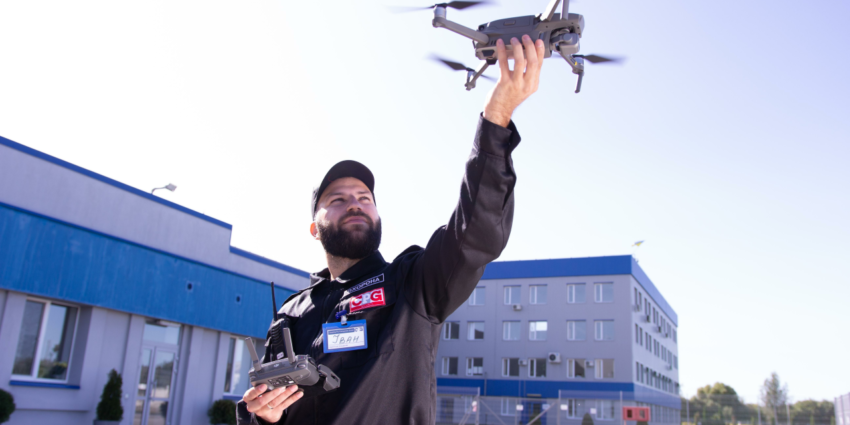 Physical security of enterprises and adjacent territories is gradually fading into the background. It is much more profitable and practical to use the possibilities of technological progress.

How to save money on security, but at the same time make it more effective? Here are some facts in favor of unmanned aerial vehicles – drones.

While a person, even the most responsible, is not able to keep track of the entire territory of a commercial facility at once, a drone can track everything. It is not uncommon for criminals to study the habits of security personnel and sneak into the building during their break or bypassing another part of the territory. The drone, on the other hand, gives an excellent view from a bird’s eye view, so not a single corner of the territory will remain unnoticed.

In addition, it will not be difficult to catch up and capture the offender, since the speed of most models can reach 100 kilometers per hour. This is especially important when the area of the territory is several tens of hectares. In addition, the drone takes photos and videos of everything that happens on the site in good quality, while the security officer can only remember the face, draw up an identikit or photograph the intruder with a smartphone camera.

Drones also help control the actions of enterprise employees and record the movement of commercial vehicles across the territory. At the same time, at any time, the selected list of users can access the online broadcast via a secure communication channel.

Security guards are at risk when patrolling: clashes with offenders do not always end in their favor, nor do they face open fires during fires. The drone, on the other hand, notices an emergency situation from the first seconds of its appearance and takes appropriate measures: it calls a rapid response team, fire department or rescue service and directs them exactly to the coordinates of the incident.

Also, video surveillance using a drone allows you to record the occurrence of fires in large areas where it is simply impossible to install stationary security cameras.

Besides, such a device is not afraid of rain or fog: equipping with infrared sensors allows you to shoot even in poor lighting conditions.

And in conclusion, from the point of view of economic benefits, an unmanned aerial vehicle with good technical characteristics costs about $ 2000-3000 and pays off in the first six months of operation, as it replaces 3-4 security officers. One operator is enough to control one drone per shift.

The article is published in Commercial Property magazine №9 October, 24/2019..

Thanks for your request!